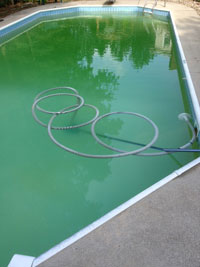 In my “second job”, I recently encountered a green, murky pool after a spell of hot & rainy weather. It was a battle getting it back. Come to find out, our cyanuric acid levels were 3+ times higher than they should be. Apparently cyanuric levels (which acts as a conditioner / chlorine stabilizer) need to be 30-50 parts-per-million — but at 150+ppm, our ‘stabilizer’ was making our chlorine unable to activate / oxygenate. So, while the chlorine level was high enough to kill the algae growth, it wasn’t doing its job.

The only way to lower your cyanuric acid levels, unfortunately, is to drain the pool down and refill it by 1/4th or 1/3rd at a time (dilution). In my limited knowledge of chemistry, I envisioned there being a base to counter the acid — but that apparently is not an option, or the option is too caustic for use in a pool where people wish to swim. :-/ So, after 2 drains (that hurt my conservationist side deeply!), the levels were down to a more-acceptable 80ppm, and the algae turned gray, and began to settle in the base of the pool to be vacuumed-to-waste (instead of filtered) so as to reduce the CYA levels even more & flush the filtering system / piping thoroughly in the process. Now it is once again crystal clear and the CYA levels are near 50ppm.

The joys and sorrows of a pool boy. Lesson learned: While the levels of chlorine should have never dipped so low as to allow algae to form in the first place, we found out some valuable information about what ‘conditioner’ (or too much thereof?) can do to a pool’s chemical balance, or imbalance, in this case. We now know a great deal more about CYA than we ever wished to… definitely going to file that episode away.